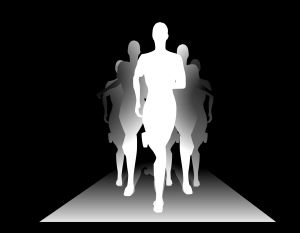 Whenever I ran with my boyfriend in the cool, shady trails of the Ohio’s Olentangy River Bike Trail, he would never waste an opportunity to tell me how I run strangely. True, I was never coached in running like he was. But, I feel that I must express my argument to his criticism. For, he claims that both men and women should run the same way. And if a woman’s pony tail swings from side to side when she runs, well then that’s a sure sign she’s running incorrectly. Of course, I was one of the pendulum pony tail gals.

I’m sure any running coach will give an accurate account of how a woman should run, but I’m going to state my opinion, which I have founded on a simple introductory physics concept: center of mass.

As a rower in college, I became very aware of the fact that men and women have very different centers of mass. Men’s center of mass is higher than a woman’s, which is near her waist. Therefore, my argument stems from the fact that men do not have as much freedom to swing back and forth when running because it would be like a spinning top that is slowing down and quickly losing balance. Men need to run with as little movement above the waist as possible in order to maintain their balance and not look like an idiot in front of all the hotty, sports-bra runner girls by falling flat on their faces.

Now that we’ve established what men can’t do, let’s look at what the women can do. Since our centers of mass are situated lower to the ground, we have more freedom to move our torsos without losing balance. I don’t know about other women, but when I’m running it just feels natural to slightly twist my shoulders and torso side to side with each leap, bound, and step. And for those of us with a pony tail, that motion will tend to transfer itself as such, giving us away as “poor runners” (according to some people).

Well, I have absolutely no idea whether this conjecture is correct or not because I have never cared enough to ask an expert. I run the way I run.